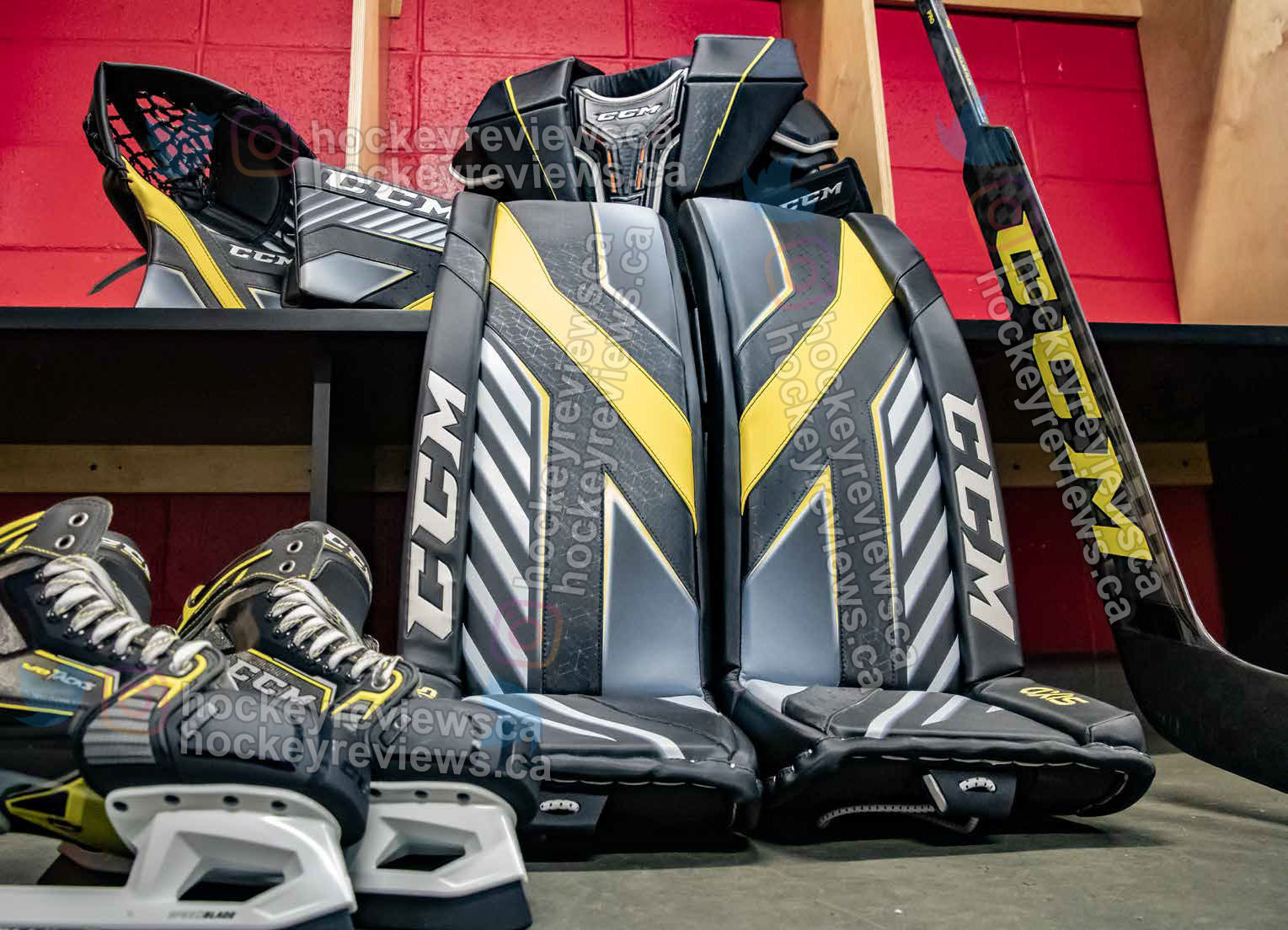 First, these are not sent by CCM nor is this post endorsed by CCM. You will probably find better photos coming from their “influencers” after these get circulated and go up. I have zero working relationship with CCM and they have never reached out regarding any of my content or posts. Please keep that in mind when reading this and my reviews as it should help with knowing that my comments come from an objective or non-influenced position. This will also explain the VERY poor quality of these photos…

I was critical of CCM’s goalie department in the past (see my video linked at the bottom), and obviously the Axis line is NOT a response to that video, but is a big needed upgrade in the goalie department to get the CCM brand up to speed compared to its competitors in terms of technology and actually updating their designs. The old designs by all means doesn’t mean CCM is a failure in the goalie market, in fact they have the biggest share of goalie gear sales… but success in sales doesn’t mean the best product and I feel CCM has been lagging behind the times and basically has to be dragged kicking and screaming to update their gear. Whether it is a fear of change, or simply design decisions is unknown personally, but here we can see some massive changes to their lineup. 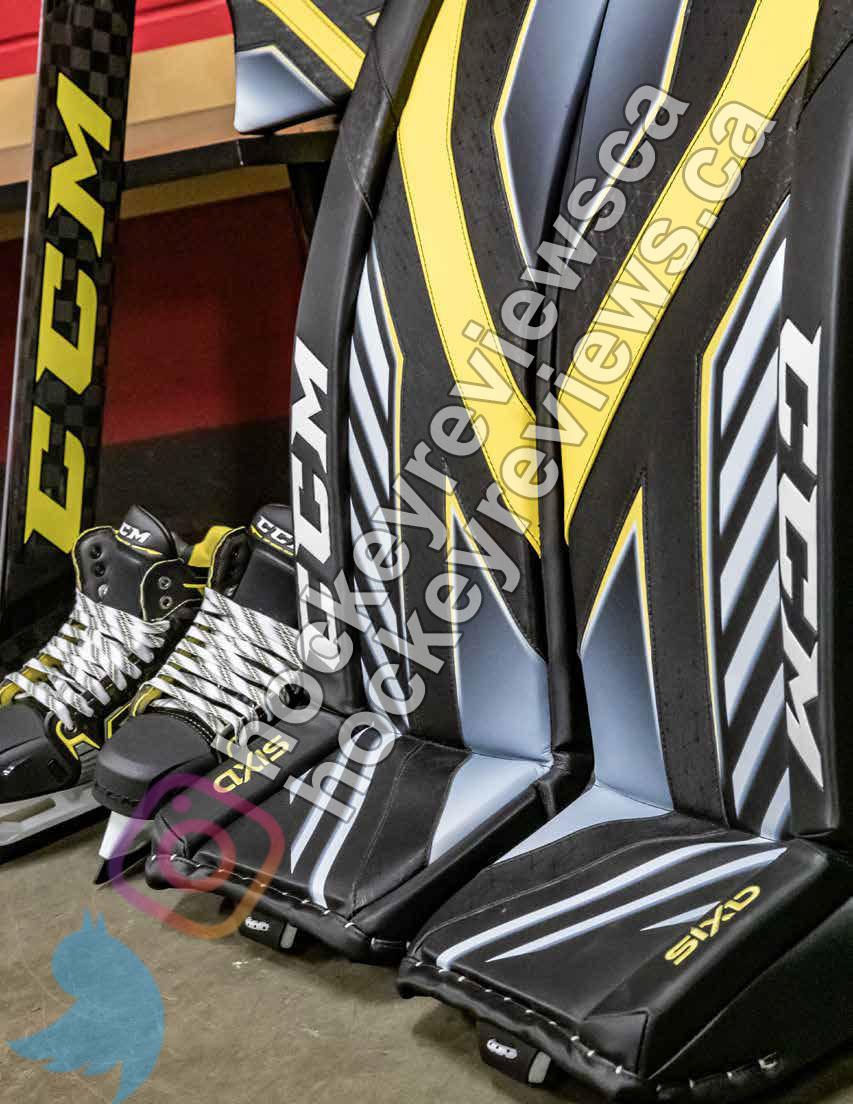 The CCM Axis line of goalie gear is a replacement to the Premier line that has existed for over a decade, has survived multiple brands and has been a staple in the Lefevre designed gear. Gone is the Premier branding, along with the Lefevre partnership (so it seems from rumours and from no branding or mention of the company in the catalogue).

There are a few big takeaways from taking a look at the new CCM Axis line of pads and gloves. Gone are the rounded medial roll that has existed back to Koho days, the Premier line was the last line of goalie gear to feature this design. While you can get it custom with other companies, the modern standard is a flat medial roll. I am very curious how this will work for Premier pad staples in the professional leagues. Corey Crawford & Marc-Andre Fleury come to mind.

The marketing for the Axis lines is “full-on revolution.” I would just like to point out how naming a product “Axis” and talking about a “revolution” is a bit of a weird one there… I will still say I believe they should’ve gone back to the “Revolution” name they used in the past. It has brand recognition, you could do awesome retro designs for Winter Classic games, and it would’ve saved CCM from the embarrassment of using the # axis. Who seriously didn’t look that up before tweeting that out… #ccmaxis it is.

Goodbye #premier hello #ccmaxis Did CCM listen to me when I said their gear is outdated and needs to be updated to match other companies? Of course not they already had this all in the making. The white part do the graphic looks screen printed, which I called back when the Eflex 4 launched. Thigh rise looks #thicc but if this new design means better sliding and rebounds while maintaining a stiffer core sign me up! The really interesting thing here though is the pant design. Looks like an armadillo shell for the top of the thigh padding allowing better telescoping and movement of that area. Also notice the interesting foam covering orange material (probably #d3o ). Looks like they are using the tech from the player gear! These were posted on GGSU, not my photo! #ccm #ccmhockey #ccmgoalie #innovation #ggsu #hockey #hockeygear #hockeygoalie #goaliesetups #instahockey #hockeygram #hockeyday #customgoaliegear #custommade #customgoalie #tendy #tendysetups #tendygear

The new core is called “L1TEXCORE” which advertises a pre-curved shape for strength, structural integrity and maximum coverage in the butterfly. I will give CCM full credit for the Eflex 4 line when it comes to the core’s strength and stiffness, and this pad will be no different. The core of the pad still looks fairly thick, which can be seen in the leaked photos. The core in these photos does seem a bit thinner, but I don’t think we are on Warrior Ritual or Bauer Vapor/Supreme levels quite yet at the top.

“Max Rebound+” adds a plus sign to the Premier 2’s “Max Rebound.” This technology is a foam built into the face of the pad that offers “extremely powerful rebounds.” If this foam isn’t a much denser version that was on the Premier 2 it will be disappointing to me, as the Premier 2 line fell behind in kicking out rebounds compared to its competitors. I would’ve liked to see a composite material here.

One of the biggest changes on this pad is the introduction of “UV Printing” & “Hexa Print” graphic zones. Digital printing comes to CCM! I believe I called CCM’s next pad to have digital printing when CCM put the lines down the spears on the Eflex 4 set, so I am going to pat myself on the back when this prophecy of mine actually came true. The graphics on these pads have had quite the negative feedback… including statements like “Ugliest pad in like ten years” and “That’s gonna be a no from me dog.” But I must admit I really like the colour gradients on the access points (in this example going from white to yellow) and from the look of the overall design I believe you will be able to make some quite “clean” looking designs if they don’t limit the colours in certain areas. These pads would work perfectly for University of Michigan goalies though. 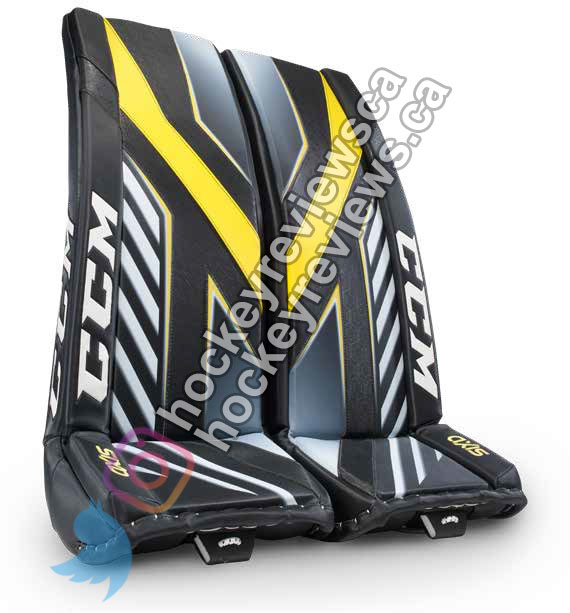 The leg channel looks very similar to Bauer’s Vapor offering, depending on the materials used it could be quite interesting. I am hoping for some sort of U-Foam implementation here and not just going with a nylon calf wrap. But it is very open allowing for a looser fit. Which makes sense since the tighter fitting pad is the Eflex line.

The boot break is 90 degree, which is closer to the Eflex line than the previous Premier 2 line which was a 60 degree break.

CCM is still using Speedskin on the pads and gloves to my disappointment. I am not a fan of this material and it was first found (in a thinner version) on the Eflex 1 road hockey set. I find that in order for it to slide well, the ice conditions must be perfect. The worse the ice gets the more “sticky” the Speedskin gets & even if the ice is fresh but really hard I had difficulties sliding around the crease. 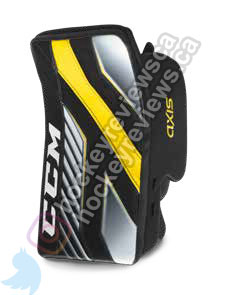 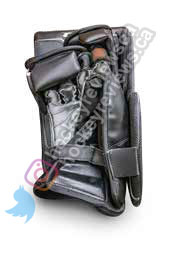 I can’t find any big changes from the Axis catching glove to the Premier 2. The Axis is advertised as “molded HD foam finger padding” on the backhand guard which I didn’t see on the previous catalog. The blocker has an interesting change that I am quite excited for. Now with an “X-stiff sidewall” which would be a nice change to CCM’s previous approach of just layering foams. I like stiffer sidewalls as I find they help cover the gap between your body and the blocker, where softer sidewalls can move and allow pucks to squeeze through. The blocking board is still advertised as “heat-laminated dual-density foam with PE” and that note is quite disappointing to me. I found CCM blocker boards don’t kick out rebounds nearly as hard as Bauer, Vaughn, JRZ boards do. I like the bigger rebounds so when you just deflect pucks they are harder to handle by incoming players. 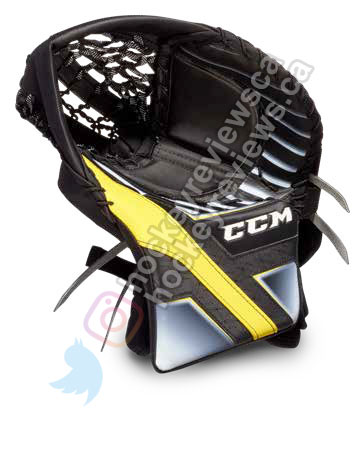 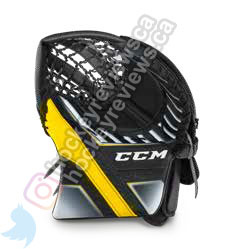 Overall the Axis line is a much needed update to CCM Goalie’s lineup. While I am not sold on it yet, I hope to give it a shot when it comes out. I would be happy to give credit when it is due, and based on some of the other goalie gear I have seen I believe the Axis line will have some gems in it, but I am not yet sold on the pads and the gloves. 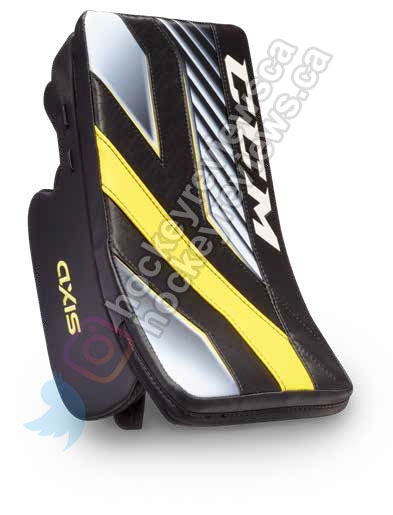 Make sure you come back for more as I go over the protective gear soon!

While I also hate to promote my other things, it has become evident to me it is important to get a viewer base that will help me continue doing reviews like this (I can’t afford to always buy new equipment!).